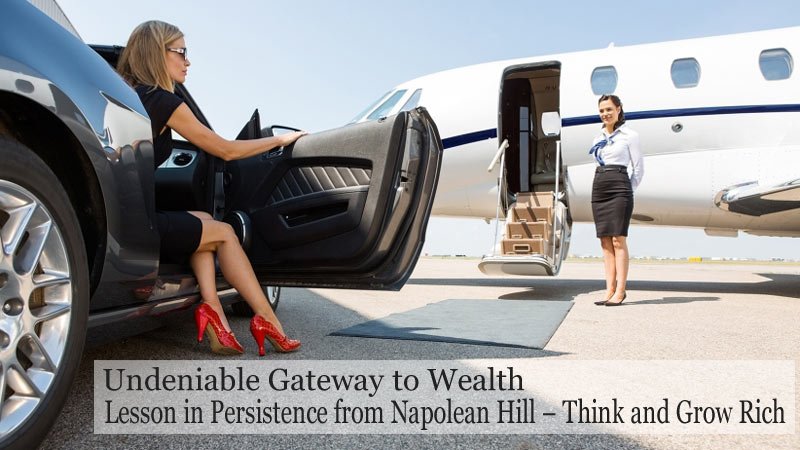 Persistence – the quality that allows someone to continue doing something or trying to do something even though it is difficult or opposed by other people.

Napolean Hill’s definition for persistence – it’s an essential factor in the procedure of transmuting desire into its monetary equivalent (the sustained effort necessary to induce faith). The basis of persistence is the power of will. 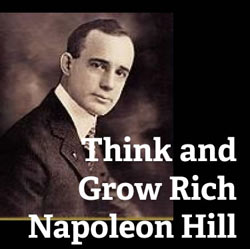 People that accumulate great wealth are generally thought of as selfish, heartless and cold-blooded tyrants.

These powerful men and women are quite often misunderstood. These extraordinary over-achievers have the gift of will-power, blended with persistence, to complete whatever objective is in their path.

In today’s society, the majority of people are prepared to throw in the towel at the first sign of opposition or misfortune.

One of the attributes of an entrepreneur is that they Never Quit – “Failure is Not an Option.”

They will never quit because something didn’t work in their favor; they learn from it, try over and over again, and keep moving forward until they prevail.

This lesson states that the only way you can ever fail as an entrepreneur is by quitting.

The entrepreneurs of today have reached their successes due to the fact that they Did Not throw in the towel at the first sign of adversity or failure.

Entrepreneurs will consistently get back up on their feet and chalk up their failure as a learning experience – a way that will not work.

“Every adversity, every failure, every heartache carries with it the seed on an equal or greater benefit.” ~ Napoleon Hill

The Lack of Persistence – ONE of the Major Causes of Failure

This lack of persistence is common-place within the majority of men according to Mr. Hill.

The starting point to overcoming failure is having an overpowering desire to succeed. It’s very important to have your Why established to help you keep the dream alive.

Your “Why” is something that is important and personal to you… it could be supporting your family, financial freedom or even time freedom.

Make sure it’s a strong and powerful reason to keep you motivated. Have it written down in a place where you can look at it on those days when speed bumps seem to appear around every corner.

If your ‘Why’ isn’t big enough to keep you driven, then I am sorry to let you know that statistics state the chances of you continuing on are NOT in your favor.

Weak desire will unfortunately bring you weak results, just like a small fire will give small amounts of heat.

If you find yourself lacking in persistence, this weakness can be altered by building a stronger fire under your desires.

It has been stated that great wealth gravitates towards people whose minds have been prepped to attract it, just like water gravitates to the ocean.

Training Yourself to Be Persistent

Persistence is a state of mind, therefore it can be cultivated and harvested into greatness. Like all states of mind, persistence is based upon definite causes, among them are:

A. Definitiveness of Purpose – Having a strong purpose to know what you want is perhaps the most important step towards the development of persistence. A strong “Why” will help fight the forces to overcome any upcoming difficulties.

B. Desire – It’s comparatively easy to acquire and to maintain persistence in pursuing the object of intense desire.

C. Self-Reliance – Having a strong belief in your own ability will help you carry out objectives. Having this belief will allow you to follow your plan through with persistence.

D. Definiteness of Plans – Even though organized plans may be weak and entirely impractical, they will encourage persistence.

E. Accurate Knowledge – Knowing that one’s plans are sound, based upon experience or observation, encourages persistence; “guessing” instead of “knowing” destroys persistence.

F. Cooperation – Sympathy, understanding, and harmonious cooperation with others tend to develop persistence.

G. Will Power – The habit of concentrating one’s thoughts upon the building of plans for the attainment of a definite purpose leads to persistence.

H. Habit – Persistence is the direct result of a habit. The mind absorbs and becomes a part of the daily experiences upon which it feeds. Fear, the worst of all enemies, can be effectively cured by forced repetition of acts of courage. Everyone who has seen active service in war knows this.

Take Your Own Persistence Inventory

Below you can take an inventory of yourself and determine in particular what qualities you may be lacking. Measure yourself courageously, point by point, and see how many of the eight factors of persistence above you lack.

This analysis may lead to discoveries that will give you a new direction for yourself and business. Below you will find real enemies that stand between you and unparalleled success and achievement.

Study the list carefully and be honest with yourself if you wish to know who you are and what you are capable of doing to reverse things.

“These are weaknesses which must be mastered by all who accumulate riches.”

1. Do YOU fail to recognize and to define clearly, exactly what you want?

2. Do YOU procrastinate and usually come up an alibi or excuse?

3. Do YOU have a lack of acquiring special knowledge?

4. Are YOU indecisive, on occasions, instead of facing issues squarely?

5. Do YOU have the habit of relying on alibis instead of creating definite plans for solutions to problems?

6. Are YOU indifferent, usually reflected in your readiness to compromise, rather than meet opposition head on?

7. Do YOU have a habit of blaming others for your mistakes and accepting unfavorable circumstances as being unavoidable?

8. Do YOU have a weakness of desire, due to neglect in the choice of motives that impel action?

9. Do YOU have a willingness to quit at the first sign of defeat?

10. Do YOU lack organized plans, placed in writing where they may be analyzed?

11. Do YOU have the habit of neglecting to move on ideas, or to grasp opportunity when it presents itself?

12. Are YOU wishing instead of willing?

13. Do YOU have the habit of compromising with poverty instead of aiming at riches?

14. Are YOU searching for the short-cut to riches without putting in the effort (usually reflected in the habit of gambling, etc)?

15. Do YOU fear criticism, failure to create plans and to put them into action, because of the fear of what others might think?

This fear of criticism belongs at the top of the list according to Napolean Hill, because it generally exists in one’s subconscious mind, where its presence is not recognized.

How to Develop Persistence – Think and Grow Rich Style

There are 4 simple steps that can lead a person to create habits of persistence. According to Mr. Hill, they do not require an unheard amount of intelligence or education, but a little amount of time and effort.

These necessary steps are as follows:

1. A definite purpose backed by a burning desire to achieve fulfillment.

3. A mind closed tightly against all negative and discouraging influences, including the negative suggestions often given by family, friends and acquaintances.

4. A friendly alliance with one or more persons who will encourage you to follow through with both plans and purpose.

These last four steps from above are essential for success in all walks of life, Napolean Hill states.

These four steps can control a person’s economic destiny.

They can lead to freedom and independence of thought.

They can lead to riches, in a small amount or great quantities.

They can guarantee favorable “breaks.”

They are four steps which can convert dreams into physical realities.

And, they can also lead to mastery of fear, discouragement and indifference.

There is an ultimate reward for those who learn to take and master these 4 steps. It’s the privilege of writing your own ticket and making life yield whatever price is asked.

Related Article to Add Persistence: Continue your journey on persistence along with the creation of organized plans and habits, follow the link for Mike Dillard’s Secret Habit Creating Software that He Used to Build His Online Empire… (It’s Free!)

Have you read Napolean Hill’s Think and Grow Rich book? What other books would you recommend? What are Your BEST Tips for Persistence? What do you find that works to create habits? Please Comment Below!

With a Deep Thirst for Knowledge, clocking countless hours of reading blogging, personal development and financial books, along with following and absorbing the plethora of information available from the most popular blogs on the Net, John will be discussing the many different methods bloggers have used to make money online following their passion. He will uncover the ‘WHY‘ that drives them and the steps they took to be successful in their own career path.

If you want to be successful, do what successful people do! 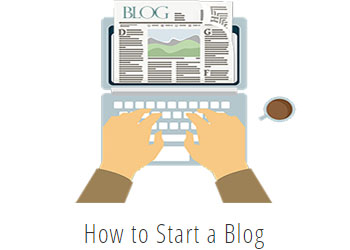 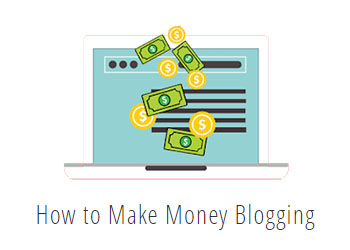